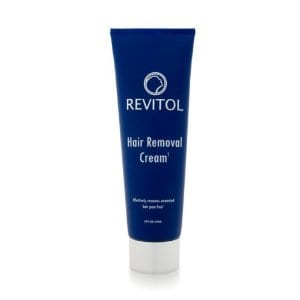 Revitol Hair Remover Cream says that you can have hairless skin on all parts of your body, without having to shave or wax it. Of course this sounds like a good proposition to many of us, but it’s not as if it is the first hair removal product to make these claims and then fall short. So how well does it measure up, and is it really going to be your one-stop solution for any unwanted hair, wherever it may grow?

Overview
Getting rid of unwanted body hair is a pretty recent notion for society. Back in the Victorian Era they weren’t too worried about it, and even up until the 1950’s it didn’t seem like such a big deal. But as modernity marches on, more and more people want to look like the hairless celebrities they see featured in magazines and movies. It’s all part of the ideal image, and one that most people strive for in one way or another. For women, it’s not very feminine to have hair growing on the face, and for men it’s preferred not to have hair on the back, and most male models feature a hairless chest.

The Claim
Revitol Hair Remover Cream is big on the claims they make. They say that their process is totally pain-free, which would make it preferable over painful things like waxing. They claim that it works just as well for both men, and woman, and that it is safe to use anywhere, even delicate areas. They also say that unlike some treatments, this only requires one application to do its job.

They claim no more shaving, no more waxing, and no more using tweezer on the very small areas. It supposedly absorbs quickly and gets rid of hair in a few seconds. They say you can forget about getting laser treatments done, or going with electrolysis. They also say that they are the number on rated product on the market for hair removal.

Since you don’t have to shave, you won’t get razor burns, razor bumps, or red areas. You also won’t have your hair growing back thicker and darker. People wonder if you can really use this on your face, including the upper lip mustache hair, and unibrow, as well as larger areas like the legs, back, armpits, and anywhere else. This is because with most products they are very specific about which body part you’re able to use it on, and which ones you aren’t.

The Hype
Anything that makes these sort of promises is producing its own hype. Everyone is looking for a product just like this as an answer to unwanted body hair and an alternative to expensive or troublesome treatments. You have to slice through these claims to see what actual users are saying.

The Commitment
If you weigh this against getting electrolysis treatments done in a salon, it’s much less commitment, since you can simply reapply it when the hair grows back. However, if you compare it to using an at home laser treatment like Silk’n SensEpil, it is about the same, with the laser treatments eventually getting rid of your hair for good.

Evaluation
Revitol Hair Remover Cream says that their cream is all natural, as opposed to commercial brands like Nair. This should also fry your hair right down to the root, so it will take it a longer time to grow back than just shaving it down.

High Probability of User Error
Even though they advertise that this works instantly, you actually need to leave it on longer than they say. Leave it on a good 15 minutes and then wipe it off and the success rate should be much higher than thinking the hair will simply come off as soon as you apply it. We’re not quite sure why they advertise instant results, because their product would be just as amazing if they said it takes 15 minutes and one application.

It’s important to consider that everyone has different types of skin, as well as different types of hair. You’re not likely going to find a hair removal product that gets glowing reviews from everyone that tries it. What you’re looking for is something that gets mostly favorable reviews, so that you can increase the likelihood that it will work for you.

Revitol Hair Remover Cream doesn’t seem to work for everyone, but enough people like it to give it a high rating. We’re giving it a Try review, as there are a good number of users that said it didn’t work. As long as you leave it on for a good amount of time you should see the results you want. Best of all it doesn’t burn like some other depilatory creams

Our Recommendation
If you’ve tried other treatments with no luck, this might be the one that gets the job done. It’s got several people that have said it worked for them, and took the hair clean off. After evaluating the negative feedback, we’ve concluded that much of it is due to user error, not following the directions, and not leaving it on for the recommended time.

What do you think? Does Revitol Hair Remover Cream work or not?

← Previous Does the Adjustable Slimming Belt Really Work?
⚅ back to blog
Next →Do Grout Cleaning Services Really Work?