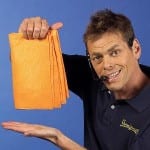 If you’re a chamois cloth aficionado you probably can’t wait to get your hands on ShamWow, but you want to know if it works first. It does pick up a ton of water, just like it shows on the infomercial, but how often could you possibly use it, and would it be enough to justify buying one?

Overview
Products that clean up messes are always popular in any market. So when a rag that comes out and says it lasts for 10 years and can be washed and reused, it gets a lot of attention.

The Claim
The basic claim is that this sham is unlike others in that it holds up to 12 times its own weight in water. That makes it rather absorbent, and makes cleaning things up a lot easier.

Plus it’s made in Germany, and as they say on the ad, Germans always make good things. They must be referring to Mercedes Benz or BMW but that’s quite the leap from luxury automobile to a rag.

The Hype
It’s a cloth. Anything that you try to bestow on it in the way of super powers constitutes as hype. It can only do so much, as it’s simply fabric woven together and used to wipe things up. No need to make a three ring circus out of it. Either you find value in it and you want one of your own, or you look at it and think: “Meh.”

But that’s not the mentality when producing and promoting a product on TV. See, the market for people that really want a chamois cloth is rather small. So in order to increase market size, they have to jazz it up a bit to get ordinary folks to tip to the side or really wanting one. That’s why they basically have to inundate you with claims, and brainstorm every fathomable use for the product to artificially increase the market size.

The Cost
They justify the cost of ShamWow by weighing against paper towel savings. They calculate that you’ll spend around $20 a month on paper towels. By using their cloth rather than paper towels you’ll save on that cost. You’ll also be helping to save the environment, by using something that’s reusable instead of something that’s disposable. But they don’t mention that in the promo.

The Commitment
The cost of ShamWow is quite reasonable, and you don’t really need to use it for everything that you do around the home. If you use it on just a fraction of the things that need to get wiped up in the course of a week, you’ll probably get a good amount of use out of it. Since you can reuse it, it does make sense to have it around.

There is the idea that you might be causing a problem by buying ShamWow. For example, you may subconsciously look for reasons to use it, and if there isn’t anything to wipe up, you might “accidentally” drop something or become more clumsy, as a way to get your money’s worth. The best way to combat this is to really ask yourself if you have spilled enough stuff in the last week to justify having something like ShamWow. If you haven’t, then don’t get it, because you could be inviting more spills into your life.

Evaluation
In the world of chamois cloths ShamWow is in its own class. However, most consumers don’t really need to hang out in this world for very long. If you own a car wash business and go through a lot of rags every day drying cars off, it might make good business sense to invest in a bunch of these, but not at the retail cost.

For the average consumer with average spills and messes, this is overkill. It would be nice to keep one around for use when washing the car, but for everyday spills and clean ups it’s no miracle cure and you can stick with whatever methods you currently use.

One point to note is that it doesn’t pick up the cola through the carpet like it shows on the commercial, but it did an alright job. They went a little overboard on the promotion, but overall it gets a big thumbs up.

ShamWow picks up large amounts of water and other liquids. It’s a fantastic product that can help you clean up all sorts of things and something you’ll have for many years with proper care.

Our Recommendation
For $20 you get enough ShamWows to last a lifetime. If it’s something you can see yourself using regularly, go for it, you’ll be in chamois cloth heaven. If you’re still on the fence after reading this page, you probably don’t need one and can safely pass on it without missing out on a big upgrade to your lifestyle.

What do you think? Does ShamWow really work?

← Previous Does Big City Slider Station Really Work?
⚅ back to blog
Next →Does the Perfect Meatloaf Pan Really Work?