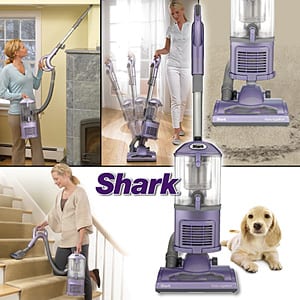 The Shark Navigator Lift-Away is an upright vacuum that is supposed to do a much better job than similar vacuums sold in stores. The vacuum market is pretty competitive, which comes as a surprise to many people. From the cheaper models like Hoover to the model sold door-to-door like Kirby, there are all sorts of businesses trying to get your vacuum dollars. The most successful brand in recent years has been Dyson, which is been shown to do a very effective job, but is rather expensive. So does the Shark Navigator Lift-Away bring the quality without the high price?

Overview
vacuuming is one of the most important things you can do in the house to keep it clean. They say the rule of thumb is for every member of your household that’s how many times per week you should vacuum your house. So if you have five people in your house you should vacuum five times a week. Vacuuming will preserve the life of your carpet, help curb allergic reactions to things like dust and pet dander, and just make your home look nicer in general.

The Claim
The claims they make about the Shark Navigator Lift-Away mostly involve its versatility, portability, it’s power, and its affordability. They say be able to clean your home more quickly and easily, because their vacuum doesn’t lose suction. It also has a very light weight canister which detaches from the main unit, so you don’t have to struggle with messy bags, filters, or canisters that are hard to remove. it swivels when it turns corners so you won’t have to make several passes just trying to get around furniture or corners in your home. It also has a tight seal which keeps allergens from getting blown all around the house. They even claim that it comes with a 10 year warranty, so if anything major goes wrong with the vacuum all you have to do is get it replaced or repaired.

They specifically state that it costs half as much as a leading brand, which obviously they’re referring to a Dyson.

They also state that regardless of the cleaning surface it will still provide a deep clean due to its suction technology. It’s easy to maneuver because it doesn’t use the same kind of design as conventional vacuums. They also say that it is very quiet when you run it, so you won’t freak out your pets as much or get a headache from how loud it is while you’re using it. They say it’s great for pet hair because of its powerful suction, and has a large capacity bin so you don’t have to keep changing it so often.

The Hype
This vacuum is being called the Dyson killer, because it performs similarly, yet it doesn’t come with the inflated price tag. That’s some pretty good hype, because of bison brand as established itself as a premium vacuum worthy of a premium price. But it makes sense that sooner or later a company would come along with a competing product at a lower price.

The Cost
Clocking in at $200 plus shipping of $45.90 the Shark Navigator Lift-Away is more expensive than other vacuums you’ll find on store shelves, but far less expensive than a comparable Dyson vacuum.

The Commitment
It’s not a Roomba where you can set it and forget it, you’ll actually have to be the one to move the Shark Navigator Lift-Away around the house so it can do the dirty work.

Evaluation
The way that they pull off the “no loss of suction” claim is that they get the air to spin at a very high speed which keeps the dirt and dust clogging of the filters. It also enabled it with an extra large storage unit so that there is a place for the dirt and dust to go, rather than having it all bunched up by the filters. This enabled the filters to stay dust free for longer time period, and the byproduct is that you get a nice steady suction while you’re vacuuming. It also means that you won’t have to replace your filters because they won’t get clogged up the way other vacuums do.

One thing we liked about the Shark Navigator Lift-Away is that they really put the focus on the HEPA filtration. They made sure to give the vacuum a very tight seal and make you basically airtight, sealing up even the tiny cracks between the different parts of the vacuum. This means that if you’re allergic to things like dust or pet dander and hair, you’ll have to worry about it getting redistributed into the air.

To back this up they’ve even gotten certification from the British Allergy Foundation. They wouldn’t have been able to get that unless it was proven beyond a doubt that the technology they’re using to seal the vacuum actually works. So basically if you’re an allergy sufferer, this is the vacuum you want to go with.

One point considered is their use of the word “Lifetime”. They referred to their belts and filters as being good for a lifetime, but that doesn’t mean that they will replace it for a lifetime, it simply means that there designed to last for the life of the vacuum. The way they accomplish this is by turning off the motor when you suck up something larger than it can handle, so your motor doesn’t burn out. For the filters, they’re just designed to last the life of a vacuum without needing to be replaced.

Were giving the Shark Navigator Lift-Away hard Thumbs up review. The consensus from users is that it’s a quality vacuum that provides excellent results at a reasonable price. That’s pretty much a 1-2-3 punch when it comes to a product like this. If you’ve been wanting to try Dyson, but couldn’t justify the expenditure, this is the vacuum you’ve been waiting for.

Our Recommendation
We recommend picking up a Shark Navigator Lift-Away if you’re in the market for vacuum, and you want something that will last you several years without having to pay a ton for it, or allow a salesperson to sell you a $1000 vacuum from an at-home presentation.

What do you think? Does Shark Navigator Lift-Away work or not?

← Previous Does Strawberry Giant Really Work?
⚅ back to blog
Next →Does the Cybersonic Toothbrush Really Work?

9 Customer Reviews on “Is the Shark Navigator Lift-Away Really That Good?”