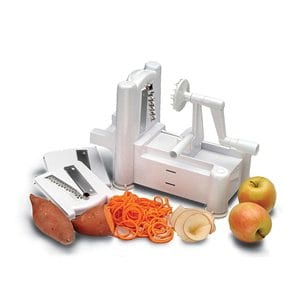 The Spirooli Slicer is a spiral slicer that can make yards of spirally slices from just about any vegetable you can imagine. Sounds good in theory, but how well does it work when put to the test in real kitchens?

Overview
Slicing food with a chef’s knife is one of the most boring and tedious jobs in the kitchen so it’s no wonder that so many different products have hit the market trying to offer a way out of it. Let’s face it, if you have a bunch of onions to slice, or a bunch of potatoes to slice up, do you really want to do it manually with a knife? Of course not, but there are a ton of lousy slicers that can make the job just as lousy.

The Claim
The Spirooli Slicer tries to separate itself from every other slicer you’ve seen before by showing off its feature of being able to keep making more and more spirals out of the foods you line up on it. They say that with the suction cups on the legs the unit stays secure on your counter and doesn’t go sliding all around. They say you can make things like hash browns to potato chips and curly fries using the same potato, but just changing out the blade to get different cuts. They also say that the unit stores its own blades underneath, so everything is self-contained.

The Hype
This has a promo ad video for it that shows several ways you can use it, and shows the product performing as well as it can. This of course is the goal of any infomercial out there, and almost every As Seen on TV product you see is following the same strategy. The real question is whether or not the product works just as well in real life as in its demo video.

The Cost
The Spirooli Slicer is $31 which includes shipping. They have this set up at a nice price point where the shipping charge is only $6 while the unit itself is $25. We did not see any mention of a money back guarantee, so it is unclear as to whether they have one and how long of an evaluation window you have.

The Commitment
When used correctly this should make your life in the kitchen a whole lot easier. The ability to blast through vegetables that would otherwise take several minutes and a lot of painstaking slicing is enough to make it worth buying. There is

Evaluation
The Spirooli Slicer is living up to expectations and the majority of users have commented on how easy it is to use, and how well it slices. There are a few ways they could have screwed this product up, either by using cheap blades that don’t do a good job of cutting, or using lousy materials that don’t stand up to extended use. But they’ve made this using the same kind of plastic found in many similar food slicers, and the blades have no problem going through even tough vegetables like carrots or cabbage.

The different uses you can come up with for this is basically unlimited. The guy in the video above says that raw foodies could use it to make noodles out of vegetables like zucchini. You can also make onions “rings” or things like those Tornado Potato treats you see at carnivals where they give you a big heaping pile of spiral potato chips covered with your choice of cheese or ketchup. If you don’t want things to be spiralled, like if you want to make cole slaw, you can still use this to slice up the cabbage really thin, and then give it a few chops so that it’s not a big long string anymore but bits like you’d expect in cole slaw.

Many of the examples they give are also quite handy, like slicing apples to go in an apple pie, or getting tomatoes ready for a homemade salsa.

The Spirooli Slicer is getting our Thumbs Up rating because it just flat out works as shown. There is plenty of evidence of this working, and users are saying they are happy with their purchase. They’ve chosen the right price point and have it so you can buy additional blades rather than replacing the unit. It is durable enough to handle repeated use and strong enough to handle big vegetables like heads of cabbage.

Our Recommendation
This makes a great addition to any kitchen, especially if you don’t already have a slicer. Even if you do have one of the slicers where you slide the food back and forth you can still pick up the Spirooli because it’s going to be able to give you the ability to garnish your different dishes and make for a better presentation.

What do you think? Does Spirooli Slicer work or not?

2 Customer Reviews on “Does the Spirooli Slicer Really Work?”