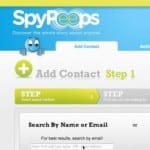 SpyPeeps bill themselves as a way to spy on your friends, kids, employees or anyone else you’re curious in. The information they deliver is readily available to the public, so it’s unclear how they call this spying. But is this data worth paying for, and is this something that will help you in your efforts to catch someone in a lie?

Cost
SpyPeeps is just $20 a month for as long as you stay a member. They are similar to other sites like Ancestry.com where they’re providing information that you can get on your own from multiple sources, and bringing it to you in one place. Some people find this convenient enough to pay for the service, while others would rather save a few dollars and do it themselves.

Social Network Spying
There’s no way that SpyPeeps can crack into a person’s account and access information that isn’t made publicly available. So if you’re friends with someone on Facebook you’ll have access to just as much information as they allow in their privacy settings. Don’t let SpyPeeps lead you to believe that they’ve found a way to hack Facebook or Twitter’s system so you can see posts that weren’t meant for you, or messages that weren’t sent to you. These big sites spend millions and millions of dollars to make sure they can’t get exploited like that.

The tracking features is somewhat helpful, because it will update itself as the person adds information, or makes changes to their profiles. This will give you a real time stream of their various activities and it will show you how much time they spend online at different sites. By looking at the offline information of a person, court records, etc. and combining it with their online activity, you start to get a general overview of how they live their lives. Not exactly exposing secrets, but getting to know them better, for sure.

“Internet Private Eye”
SpyPeeps says they’ll be your Internet private eye, but this is hardly the case. You will be able to get information on someone that is in the public domain, such as court records and documents. You will also be able to aggregate all of their social activity into one place. But as far as uncovering any secrets, you’ll probably be disappointed.

The kind of secrets people keep usually don’t show up in these court records, even if they have any. And people aren’t going to divulge their secrets on a social networking site, that’s why they’re called secrets. So you probably won’t be able to catch your lover cheating on you, or find out any other life-changing information with it. But it can still be fun to play around with, and useful for some people.

For Parents
SpyPeeps would be a good service to have in order to track your teen or child to see what it is they’re doing. This information is the kind of stuff that a sexual predator will be able to uncover in order to get to know them better. You’ll get a chance to see all of the different social networks they’re on, and how much information they’re providing to total strangers.

This is also a good way to screen new boyfriends that want to date your daughter. It creates an overall picture of the kind of person they are, and what they’re interested in. By seeing their videos, their likes and dislikes, and their picture, you can have a leg up when you actually meet in person.

For Employers
This is a good way to get a lot of information on an employee, or a potential employee, in a quick amount of time. You can’t really judge a person by their resume, because that is them putting their best foot forward. However, when you see their different social network profiles you’ll be able to get a better sense of who they are than asking them questions in an interview. Although you’re not supposed to use this information during the hiring or firing process, it is nice to store it away in that mental file.

SpyPeeps is just another one of those annoying websites like MyLife.com where they pull together public information into one user interface and try to make it seem more interesting than it really is. You won’t really be playing detective too much, and you can get almost as much information on someone by just Googling them.

They get credit for making a nice-looking site, and for displaying it nicely and giving you the feeling that you’re doing something you shouldn’t be doing. However, most of the information you’ll “uncover” with them is nothing that will drop a bombshell on you. It’s rather underwhelming, and if you know the person at all you’ll already know where they live, what they look like, where they went to school, and their last known address.

Our Recommendation
Spying on your friends is not a friend-like thing to do, and if you want to know someone’s secrets, you should just ask them. If they don’t want to tell you, you should respect their privacy. Going behind someone’s back means that there is a level of distrust in place and you need to seriously reconsider your relationship with that person.

For concerned parents and savvy employers, this is a nice tool that will help you in your quest to get to know your kids and employees better.

What do you think? Does SpyPeeps work or not?

← Previous Does Profollica Really Work?
⚅ back to blog
Next →Does Support Squad Really Work?