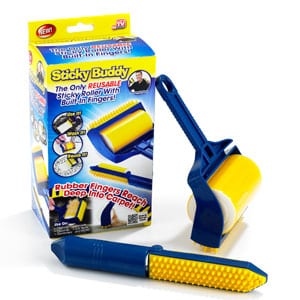 The Sticky Buddy is here to save you from the old style of lint rollers. It’s basically a lint roller on steroids, but without the need to buy sticky tape when it runs out. It’s claim to fame is that you can simply wash it off, dry it off, and go right back to using it. But can something like this really work, and what are actual users saying about it?

Overview
Lint rollers are pretty trivial items, and you may not even realize that you’ve been unhappy with its performance until someone comes along and shows you a better way to do things. That’s the case with the Sticky Buddy, which is aiming to take the concept of lint rolling and turn it on its head. After getting one of these you might start coming up with all sorts of different uses for it, ones that you never thought you could use a lint roller on. See the Evaluation section below for more ideas.

The Claim
The biggest claim that Sticky Buddy makes is that you can use it, wash it off, and use it again. This is something that really sets it apart from other lint rollers out there and if it worked would make it the last one you’d ever need to buy. They also say that it’s so sticky it can pick up literally anything you might drop onto the floor. One example they show is row after row of dimes. Now, you might not want to use it to pick up loose change, but they are just showing that it can pick up more than just your average sized crumbs and pet hair.

The Hype
The hype is that this is doing battle with the Schticky, and based on user feedback is kicking butt in real world trials. The Schticky might have the advantage of being pitched by Vince Offer, but maybe he got behind the wrong product this time.

The Cost
You can get a Sticky Buddy for $24 out the door, which will actually get your 2 of them, plus 2 mini versions shipped right to your house. When you compare this with getting a traditional lint roller with disposable tape, you can see that a one-off $24 purchase just makes sense. Especially since it does a better job than the more expensive option.

The Commitment
This is supposed to help you out and be a lifestyle upgrade by taking away your dependence on ordinary lint rollers. Instead of having to remove the old sticky part of the lint roller every time it gets full of debris, you just wash off the Sticky Buddy, let it dry a bit and you’re ready to go again. Plus, it’s far more sticky than a regular lint roller, so it’s able to pick up more on the first pass instead of having to go over the same spot again and again.

Evaluation
The Sticky Buddy draws a lot of skepticism from people that first hear its claims, but you really can reuse it. What sets it apart is its rubber fingers, which do a great job of brushing off the debris so that it can stick to the roller. Without the fingers doing their job, it might not be as effective as it is.

A lot of people like using the Sticky Buddy on carpeted stairs, instead of trying to use a vacuum cleaner with its attachments. A quick pass with this and you get all of the surface dirt and debris and carpet fuzz and your stairs will look like you’ve just vacuumed them, but you won’t have to wrestle with a heavy vacuum. Also, for dry spills in the kitchen like sugar, flour, or cereal you can just use your Sticky Buddy instead of breaking out the broom and dustpan.

Reviews for the Sticky Buddy have been favorable, with most people saying that they’ve really enjoyed incorporating into their daily routine, and having it handy for the unexpected spill. If you’ve got a baby in the home that likes to play the “throw your bowl of cereals on the floor” game, you pretty much have to get one of these. Likewise, if you have a cat or dog that likes to lose most of its coat in the summer time, you should invest in a Sticky Buddy pretty much right now.

The Sticky Buddy is one of the few lint rollers out there that actually gets our seal of approval. It’s not every day you find a reusable one that’s actually reusable. Some others make an attempt, but fall short of the mark. By being ultra sticky, you’re able to pick up more stuff in less time and make quicker work of de-linting your suit or outfit in the morning, and you’ll have an easier time picking up bigger spills.

The mini that they include as part of the package also makes it nice to have with you as you go about your day and want to stay looking fresh.

Our Recommendation
This makes a great addition to any home, because you’re going to need it whether you have it or not, so you might as well have it. Spills, hair, dandruff, and lint are just a part of life. Instead of trying to deal with it the old fashioned way, we recommend getting a Sticky Buddy set so you can quickly clean up and get on with your life.

What do you think? Does the Sticky Buddy work or not?

← Previous Does the Swiffer SweeperVac Really Sweep and Vacuum?
⚅ back to blog
Next →Does the Bionaire Steam Mop Actually Work?

156 Customer Reviews on “Does the Sticky Buddy Really Work?”