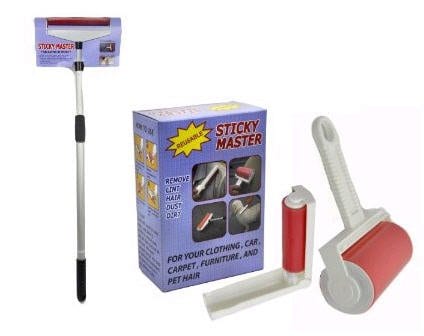 The Sticky Master is a set of lint rollers that are able to be washed off and reused again and again so that you don’t have to mess with the tape strips that an ordinary lint roller uses. Lint rollers were in desperate need of an upgrade, but is this effective enough to replace yours?

Overview
Using a regular lint roller can be pretty tedious because they can fill up quickly, and when they do you’ve got to peel away the used up tape to reveal a new strip. If you’ve got a pet you can find yourself going through roll after roll trying to pick up pet hair, and most times they’re not sticky enough to properly pick up the hair anyway. Having a washable and reusable lint roller means you wouldn’t have to keep buying disposable ones, but only if it successfully removes lint, hair, and fuzzies from your clothes and furniture.

The Claim
Sticky Master says that you can run this under warm water which removes the dirt lint and hair and allows you to use it again. They also say that this saves you hundreds of dollars, but we think that might be pushing things a bit. Disposable lint rollers are only a few dollars, and if you get the kind that have replaceable rolls they’re even more economical. That means you have to be going through dozens of them per year in order to rack up hundreds of dollars.

The Hype
These endless lint rollers have been getting a lot of attention lately because of their claims at being the last lint roller you’d ever need to buy. Those that try them out are usually unimpressed with the claim of being able to wash and reuse this, saying that the stickiness wears off, or that you have to wash it off so many times it makes it impractical.

The Cost
Sticky Master is $20 for a pack of three which includes a jumbo roller as well as a travel sized mini and a standard size as well. Keep in mind that you can get it for less, but this is probably a two pack that doesn’t include the jumbo size. In our estimation the jumbo sized roller is worth paying a little more for, just so you’ve got all of your lint roller bases covered.

The Commitment
In theory, this should represent a reduction in your lint roller commitment level. But real world reports are coming in that you spend just as much time washing this off as you would changing out used up sheets of sticky tape on an ordinary roller so it’s pretty much a break even in the commitment department.

Evaluation
When put to the test Sticky Master performs like a regular lint roller, but also leaves behind some lint that a roller with a fresh tape strip usually gets. If you go with this, make sure you get the triple pack, because there is a double pack out there at doesn’t include the giant sized roller. The three pack has a jumbo roller as well as a travel sized roller and ordinary sized one. All three sizes come in handy depending on what job you’re tackling.

There are a lot of odd jobs you might find for this once you don’t have to be considered about using up a lot of disposable sheets. People have started using these directly on their pets as a way to remove pet hair before it finds its way to furniture and clothing. The jumbo size can also be used to pick up dry spills on carpeting and hard flooring. Most people just think of the standard uses, like lint on a jacket or blouse, or pet hair on furniture or clothes. But once you have these handy you’ll start finding all sorts of things you can pick up with them.

Sticky Master is getting a Solid Try rating from us. It is similar to the Mr. Sticky or Schticky that you might have seen being sold on TV, and is at a similar price point. The thought is that if these work like they say you won’t have to go lint roller shopping for a very long time. But being rational about this, you’ll probably still have to get another one at some point in the near future, because nothing stays sticky forever.

Our Recommendation
Getting the triple pack for $20 seems like a fair deal, and they say it’s backed by a 10 year replacement warranty in which they’ll send you a new one if this one wears out. The details on that are sketchy, you probably have to pay for shipping and handling, but it shows that they’re pretty confident you’ll like it, and if it only lasts for two or three years it’s still a great buy.

What do you think? Does Sticky Master work or not?

← Previous Does Gray Away Really Work?
⚅ back to blog
Next →Do Shimmer Glitter Tattoos Really Work?