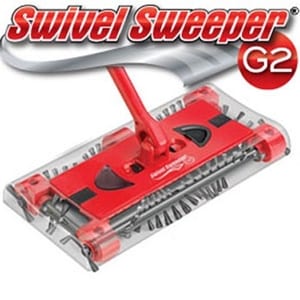 The Swivel Sweeper G2 looks like a Space Age broom, but can allegedly do much more than a broom can. It’s not every day that you find a company that will take an already top selling product and make improvements and enhancements to it. But that’s exactly what they’ve done here, by giving it an angled joint so that you can get under furniture, and a touchless dirt tray so you don’t have to get messy when you clean up. But are these enhancements worth upgrading if you’ve already got the original, and is this worth buying if you don’t have one already?

Overview
Cleaning your home properly requires many different cleaning tools, and aside from a vacuum a sweeper is probably the next most important item. You need to have something that will be able to quickly pick up spills, dirt, dust, and anything else life brings without a lot of involvement on your part. A broom and dust pan just doesn’t cut it in most instances, so you need something that you can quickly pull out, use, and put away without much hassle. This next generation of Swivel Sweeper has several improvements that make a strong case for this being the answer.

The Claim
The makers of Swivel Sweeper G2 say that you can use this on all your services like hardwood, tiles, carpeting, and especially in places that are hard to get with the vacuum like behind furniture. They say that it can clean up things like messes your pet makes, sloppy messes, and of course dirt, dust and just about everything else.

The Hype
Most cleaning products you see on TV like this one make it look like you can clean your house in only a few minutes, but most times they just work OK. It’s only once in a while that you find a product that cleans as well in real life as it’s shown to in the advertisements.

The Cost
The Swivel Sweeper G2 is $55 or you can get two for $70. In this instance it make sense to get someone to go in on it with you, because when you get two it’s just $35 each, a significant savings.

The Commitment
This should be a reduction in the amount of effort it takes you to clean up your home, because it is designed so that you don’t have to bend over to get under furniture like beds and sofas. Any time you don’t have to drag out the vacuum and lug it around the house, you’re saving time, and upgrading your lifestyle.

Evaluation
The Swivel Sweeper G2 is a pretty good cleaning tool to have in your arsenal, because it gives you something you can use for small jobs so that you don’t have to pull out the vacuum. It only weighs 2 pounds, so you can easily move it with throughout your home without getting tired. The swiveling head really does rotate the full 360 degrees which at first is a little hard to control, but once you get the hang of it it’s really handy.

We like how it’s cordless, so you’re not restricted to where you can go by a cord, but still powerful enough to get the job done. There’s a pretty unique function to it in that it cleans from all four sides at once, so there’s no wasted motion on your part because you’re cleaning when you push it, as well is when you pull it back to you. This prevents you from just moving the dirt around because no matter how you use it, even a side to side motion will pick up something.

We also like that it has a rechargeable battery so that you don’t have to continually buy standard batteries for it. This makes it somewhat of a “green” product because you won’t be continually disposing of used batteries, and having to buy new ones. It also makes it a pretty economical purchase as well, as you won’t have the added expense.

It’s nice to see the little enhancements and improvements that they’ve made because some of them may seems simple, but they make a big difference. Like the rubber tip they put on the handle so that you can lean it up against the wall without having it fall over or scratch your wall. This may not seem like a big deal, but you’ll appreciate it when you don’t have to continually pick it up off the ground while cleaning.

Even though they say it works on carpeting, it’s not going to replace your vacuum and do a proper job sucking up dirt from between the fibers. It’s mostly for surface dirt that ends up on your carpet, or for spills like cereals, and dustbunnies or dirt clumps. It shouldn’t be used exclusively on your carpets, get a top-rated vacuum for that instead.

Many people really like their Swivel Sweeper G2, and one of the most commonly talked about features is the touchless dirt tray, which allows you to empty it when it gets full, without any hands dirty. There are a lot of good features to this sweeper, and at this price point it’s a great deal. Of course, it’s not going to be a solution to all your cleaning needs, but you don’t really need to be.

Our Recommendation
This is a great sweeper to have in your broom closet, and does a great job of replacing your broom if you’ve still got an old-fashioned one. You should also consider the Swiffer Sweeper Vac and decide between the two.

What do you think? Does Swivel Sweeper G2 work or not?

← Previous Does the Wilton Giant Cupcake Pan Really Work?
⚅ back to blog
Next →Does the Diamancel Foot File Really Work?

3 Customer Reviews on “Does the Swivel Sweeper G2 Really Work?”