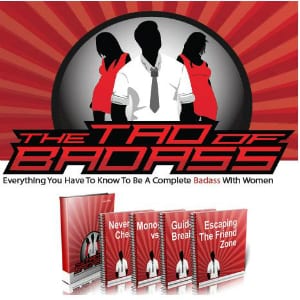 The Tao of Badass takes two seemingly conflicting states of being and meshes them together. Tao basically consists of being one with something, and not really forcing things. Badass conjures up images of being that guy that enters the room in The Entrance in that Heineken commercial. So does this guide for picking up women really show you how to be the guy that guys want to be around and women want to be with?

Overview
There’s no shortage of Beta males that have low self-confidence and defer to he Alpha males when it comes to pulling the best looking women out there. That’s why there are so many books on dating and picking up women, and there are even dating coaches that can help the socially impaired approach women, get dates, and take things to the next level. But why do some guys need help, while others seem to make it look easy?

There are any number of reasons why a guy finds it hard to pick up women. It could also be that they’re not to bad at it, they just want to raise their game. Some guys have trouble recovering from a long-term relationship and re-entering the dating scene. Others might not have a lot of experience because they weren’t popular in high school, and this gave them a slow start in college. Whatever the cause, it isn’t necessary to delve deep into the psyche in order to start fixing things right now, in the present.

The Claim
The Tao of Badass says that it contains everything you need to know to be a complete badass with women. It says that it can help you avoid the dreaded friend zone, how to pick up on the signs that a woman is attracted to you, how to get confidence, and most importantly they say that they show you what you’re doing wrong, and tell you to stop doing it.

It’s almost as important to not do the wrong things as it is to do the right things. If you just stop doing the wrong things you’ll immediately be ahead of every single guy out there that is still doing them. Often it is easier to get yourself to stop doing something that you already do than it is to get yourself to start doing something that you normally don’t.

The Hype
The hype is that this sort of treats women like a commodity, or like they all think exactly the same. Obviously there are some generalities that you can make, the same way that you can make broad statements about guys. It’s not going to apply to every man or woman, but all else being equal it’s true. There’s also some hype because this deals with relationships and paints a pretty vivid picture of you being a more confident, more desirable guy, with women wanting you, which is pretty much every straight guy’s fantasy.

The Cost
The complete Tao of Badass program is $97 and is sold through ClickBank. This means that you don’t have to worry too much if this works or not, because you can try out the entire thing for a full 2 months and if you’re not satisfied with what you’re learning, and not getting the sort of results that you though you would, you just request a refund and get every penny back. Chances are you’ll learn at least something to make it worth your while, even if you do end up returning it.

The Commitment
You have to commit to actually following the steps in this program, and some of them are going to require getting out of your comfort zone and challenging some long-held beliefs that have been holding you back. Changing is one of the hardest things for a human to do, but it is possible, if you put the effort in. If you don’t do things differently in your life, you’re just going to get the same results you’ve been getting, and those results can’t be that great if they’ve led you to this page.

Evaluation
The Tao of Badass says that attracting women is a learned skill, and we agree. Repelling them is also a learned skill, and having a mixed bag of results is also learned. It’s not something some guys are born with, they’ve just strung together enough successes that they’ve built up the confidence level to go out there and try again and not really worry about the results. What happens with many guys is that get turned down a few times and make that their life story, which only perpetuates the problem.

Tao of Badass can be the turnaround you need. It can break the cycle and get things to start trending upward. It can show you the baby steps you need to take to be the sort of guy you know you can be, if you just had the right guidance. It can help you identify the bad habits you have, and show you how to eliminate them. It can also show you the good habits you need to start practicing. Once you absorb them into your natural behavior you should notice a measurable difference.

Our Recommendation
We like that this is not just a book, but that it also tries to provide even more help on their website with a lot of free and useful content that you can read and start putting to use before you buy the book. We recommend at least trying this out, since you’re covered by the guarantee, but be sure that you go all in with it, and give it your best shot.

What do you think? Does Tao of Badass work or not?

← Previous Do Phiten Bracelets and Necklaces Work?
⚅ back to blog
Next →Does WoW Secrets Really Work?

12 Customer Reviews on “Does the Tao of Badass Really Work?”