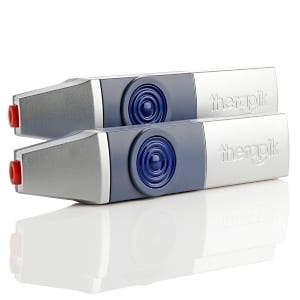 Therapik is an electrical device that is supposed to be able to stop the itching and pain associated with bug bites of all sorts. The big draw is that you don’t have to use any sort of drugs or medicines to find relief, and you don’t have to wait for it to work. But can this really help minimize or eliminate the desire to scratch the itch from a bug bite, or is it a big flop?

Overview
Bug bites are one of many people’s pet peeves because most of them aren’t painful, just annoying because they’re always itching. And as we all know scratching them just makes it worse. If you end up with a lot of bites it can really drive you mad as you’ll be tempted to scratch all of them and it can really become unbearable. If you end up using an antihistamine to help with the allergic reaction, that’s a pretty extreme measure for something that can apparently be treated without the need for over the counter medication.

The Claim
The makers of Therapik say that it provides clinically proven results, and that their product is FDA cleared. They also claim that it works on a myriad of bites, including those from the ubiquitous mosquito, angry insects like hornets and wasps, bees, and even fire ants that are notorious for the problematic bites that they give. They even say that this works on jellyfish stings, and also covers most bugs that bite or sting as a defense or attack mechanism.

The Hype
The hype comes from the design of the unit, and the fact that it doesn’t use any chemicals or drugs and just a red light. It’s pretty much a space age way of dealing with bug bites, using infrared heat from an electronic bulb. For many this will provide enough intrigue to try it out, just the thought of being able to treat an insect bite with an electronic device. Aside from that it’s also stylish, so it looks like a technological wonder. The way it actually works is a little less amazing, but the fact that many are saying it works adds to the hype as well.

The Cost
The Therapik unit is around $30 on Amazon. It’s a little pricey, but when you compare it to the cost of other bug bite treatments, and consider that this is a one-time purchase that can be used again and again, it’s not bad.

The Commitment
They say the typical application takes about 30 seconds, so there’s really not a lot of involvement on your part. You simply hold the unit on your bite location and press the button. Continue holding it there until the heat from it becomes more than you can stand. That’s it. They say that if you apply it once and the pain keeps on, you can apply it again as needed. Since there’s no chemicals or drugs involved it’s nice that you can reapply as much as you need to, and this might be necessary if you were bitten by an insect with a big stinger.

Evaluation
The science behind Therapik is pretty sound. They say the reason why it works is that the venom or substance delivered by most insects that “bug” us is sensitive to heat, and so if you apply the right amount of heat it breaks down and therefore doesn’t have its effect on us. What their device does is provides the right amount of heat so that it kills off the irritant, but doesn’t burn the skin, and provides the heat in a very localized area. The result is that you don’t suffer from the adverse effects of an insect bite.

Since you’re in control of how much heat is being delivered there’s little chance of burning yourself. First, you’re the one holding it against the bite, and second when you release the button the heat stops being generated so there’s basically two fail-safes to this. You can either remove it from your bite if it gets to hot, or let go of the button. By holding on there until you can’t stand it any more, you should be raising the temperature to the point where the venomous substance from the insect can’t survive and cause harm.

The Therapik is getting a Thumbs Up review from us, as it’s getting great reviews from those that try it, and most users seem very happy that they no longer have to use creams, lotions, or scratch incessantly at their bites. Of course this is a reactive product, meaning that you should still take proactive measures to not get bitten in the first place, whether with insect repellent or avoiding places that are infested with bugs. But sometimes things happen and you end up with a bite and this would be a good thing to have handy in just such an occurrence.

Our Recommendation
If you frequently get bug bites in spite of your best efforts to prevent them, this would be a great product to buy. It should eliminate your need to use things like calamine lotion or AFterBite, and it’s reusable and powered by batteries so you can buy it once and use it again and again. There are cheap knock offs that get lousy reviews so be sure to go with the name brand on this one, because it doesn’t cost much more and actually works.

What do you think? Does the Therapik work or not?

12 Customer Reviews on “Does the Therapik Really Work?”