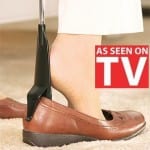 Shoehorns used to be made with animal hoofs, and have been around since pretty much the dawn of shoes, and now we have things like Shoe Dini. You may wonder what the world is coming to, but there are people that have trouble reaching down that low, and as the baby boomers age these types of products will get more and more popular.

Overview
Shoehorns work and work well, that’s why they’ve been around for so long and their design has gone unchanged for several decades. So when they made the Shoe Dini all they had to do was design it so that you can use it without having to reach all the way to the floor. By using a telescopic bar they made it so people of varying heights can all use the same product.

The Claim
You don’t have to bend over to get your shoes on any more, the way you do if you use a traditional shoehorn. By enabling it with a special clip on the back, not only does it help you get into and out of your shoes, it always helps to keep them in place.

The makers of Shoe Dini also claim that you’ll be able to pick up your shoes and accurately move them from one place to another without having to bend down.

The Hype
It’s a shoe horn on a stick. Get over it. Anything you say other than it’s a shoe horn on a stick is considered hype. By getting Gilbert Godfried involved in the promotion of Shoe Dini, they further added to the hype, because his voice makes anything seem ridiculous. It’s as if they knew there would be backlash to a product like this, so they said let’s have Gilbert promote to so people know that we realize it’s a very simple innovation.

Making the commercial rhyme, and over exaggerating the show putting on process is another way to show that the makers understand that they are peddling yet another as seen on TV product. It’s a bit satirical, and tongue in cheek, but it gets the job done.

The Cost
You can grab Shoe Dini for a song at Amazon. It’s currently priced at $5 and is eligible for Super Saver shipping so just pair it with something else you want for $20 and you can get both delivered to your door with no shipping charges.

The Commitment
You have to commit to assembling the product once it comes, and then using it after you do so. You’d have to use it for about a month before it becomes a habit, and then you won’t think about putting on your shoes without using your Shoe Dini. If you get it for just $5 it doesn’t really matter how often you use it, you’ll get your money’s worth if you just use it for church on Sundays.

Evaluation
There are a few unique features that puts this product ahead of a regular shoe horn. It has a clip in the back that lets you sort of hold on to your shoe, it kind of acts like a pincher like your thumb and forefinger would be without you having to bend down and put them on the shoe.

Sure, of course it does. It can’t not work because it’s based on a shoehorn that has been around for over 100 years. That’s the beauty of inventing in today’s marketplace, you don’t have to reinvent the wheel, you just have to make it a little better than it was before.

If you’re dealing with old age, arthritis, or any other malady that prevents you from bending over, or you just don’t like to, you will be happy with this. Just don’t to pick up the shoes like they show in the infomercial and you’ll be fine. All that leads to his some hilarious outtakes and your shoes flopping around. There’s just not enough grip with the clip to perform such a feat.

Our Recommendation
For those that have trouble bending over Shoe Dini is recommended fully. It will let you keep your balance and remain upright while putting on your shoes. If you get good enough with it you’ll be able to keep your shoes in place while you try to put them on.

What do you think? Does Shoe Dini really work?

← Previous Does the Perfect Brownie Pan Really Work?
⚅ back to blog
Next →Does Keypout Really Work?